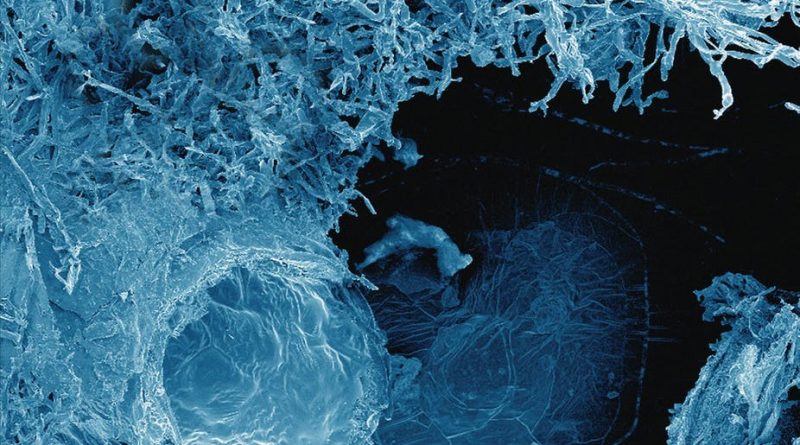 By Elizabeth Bent Research Associate, University of Guelph
People are increasingly aware of the link between the trillions of microbes that live within our bodies and human health. Studies have found that a healthy population of bacteria, or a microbiome, in a person can prevent food allergies and even treat depression.

Just as in the human body, these types of tiny bugs can play an beneficial role in plant health. Growth-promoting bacteria or fungi can be added to plants or soil in a variety of ways – in seed coats, suspended in water and sprayed on plants or soil, or mixed into mulches that are added to the soil or placed around plant stems.  Study of this microscopic world has been going on for decades but is now attracting more interest from researchers looking for environmentally benign methods to improve agriculture. 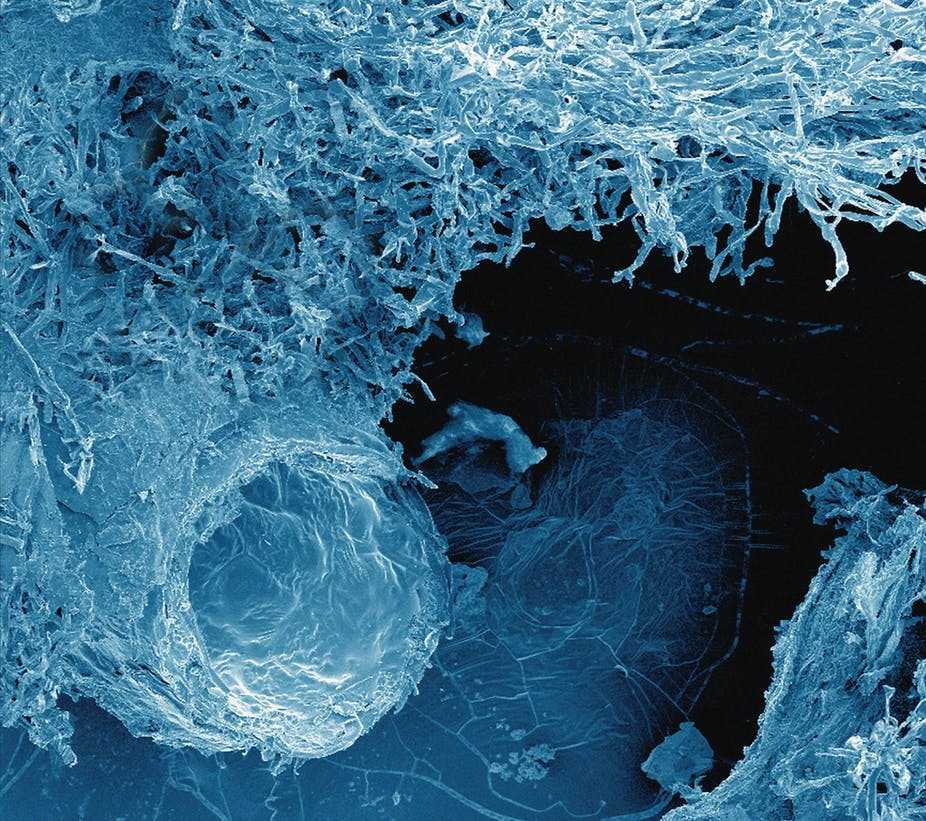 Nitrogen fixing
All plants in natural soil have associations with microbes, including bacteria and fungi. The symbiotic relationship between plants and microbes has been evolving for at least four million years: fossil evidence shows structures formed between early land plants and what appear to be fungi.

Plants have evolved to rely on microbes for growth, particularly in challenging environments. For example, microbes that are important to plant growth include bacteria and fungi that fix nitrogen from the air, making nitrogen available to plants for growth. These microbes often live inside special structures know as root nodules, which live on the surface of roots.

The impact of soil microbes on agricultural plant growth was first formally described in 1904 by Lorenz Hiltner, though agricultural treatments aimed at modifying microbial activity in soil have been used since Roman times. For example, the Romans would grow plants that form associations with nitrogen-fixing bacteria (clover, alfalfa) in crop rotations to improve soil fertility. They didn’t know why the clover and alfalfa plants helped improve the growth of other crops grown in the soil, but we now know that these plants can enhance levels of nitrogen in soil, via the activity of nitrogen-fixing bacteria.

Figure 2: Fungi that form a symbiotic relationship with plants are known as mycorrhizae. Photo: Pacific Northwest National Laboratory, CC BY 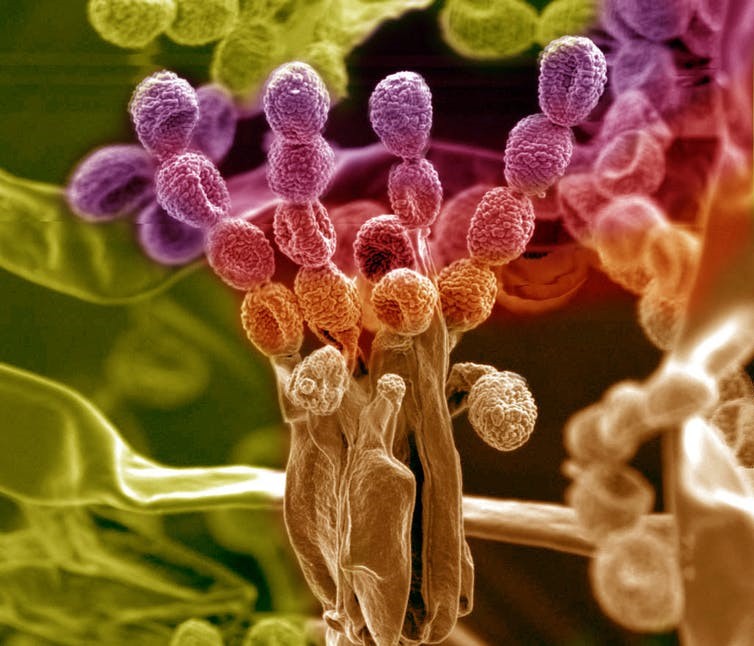 There are also thousands of species of fungi that form structures known as mycorrhizae with different plant hosts. These structures are thought to have enabled plants to colonize land and are beneficial in that they allow the plant to exchange sugars for nutrients and water scavenged from the surrounding soil by fungi. Mycorrhizae extend into the plant root, allowing fungal tissue to wrap around or penetrate into plant cells to form the structures where nutrient exchanges occur. Microbes that form specialized structures with the help of plants, and live in a mutually beneficial partnership with plants, are known as symbiotes.

Lodgepole pine balancing act
At the same time, there is a whole host of non-symbiotic, or free-living bacteria and fungi that are beneficial to plants. They can live in the soil surrounding plant roots (a region called the rhizosphere), on plant surfaces or even live within the tissues of the plant itself. Beneficial microbes that live within plant tissues, whether they are symbiotes or not, are in a unique position to affect plant metabolism and health.
For example, free-living microbes, known collectively as endophytes, can suppress plant pathogens or other harmful organisms. Endophytes can also assist plant growth directly by regulating plant hormones, activating plant immune responses and providing the plant with additional nutrients. Since the 1990s, scientists have isolated endophytes from plant tissue and can describe communities of endophytes in terms of gene sequences to better understand their functions.

Figure 4: Symbiotic Rhizobia bacteria form nodules on roots of legume and supply nitrogen (N2) from the air to the plant. The additional nitrogen remaining in the soil after a legume crop usually ranges between 50 and 150 kg N per hectare. Photo: Patrick Francis. 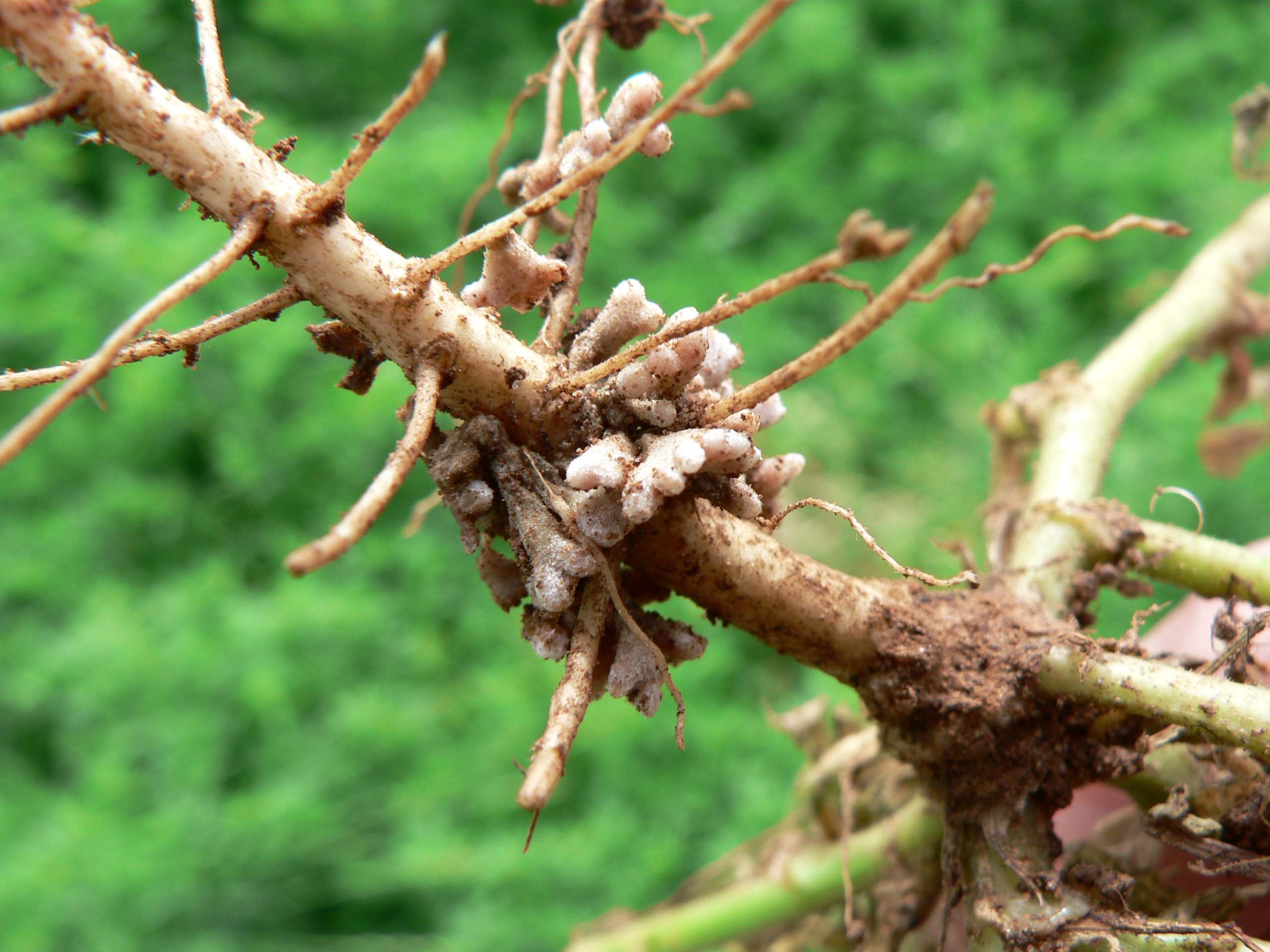 Simply adding a microbe that can improve plant growth may not always be enough because the other bacteria and fungi surrounding and interacting with the plant will also have effects, as does the plant’s environment.  For example, a bacterium known to improve the growth of lodgepole pine can be derailed by the presence of a single other competing bacterium. This effect was seen both for a plant-beneficial bacterium that was an endophyte, and one that simply lived on the plant root surface, according to a study.

Microbial cocktail
What this means is that if you have isolate a microbe that has plant-beneficial effects under controlled conditions, you can’t be certain it will work under real-world conditions unless it is tested thoroughly.
It also means that it may be very important to take into consideration the composition of microbial communities the plant is exposed to – whether it’s the soil, root surfaces, the aboveground plant surfaces – when determining the conditions needed for optimal activity of plant-beneficial microbes.

The quest for finding microbes that can be used in plant agriculture for improving plant growth or health has a long history. As we learn more about the complicated interactions of plants with their microbiomes and the environment, we grow closer to understanding how these ancient practices can be refined and used in the future.
Source: The Conversation January 24, 2015.

What you need to know about soil to keep plants healthy

Soil needs the right structure and microbial ecology to help your plants grow.

By Petra Marschner Professor of Agriculture, University of Adelaide
Most people think of soil only in terms of the dirt that sticks stubbornly to their hands and shoes. But soil is much more than that.  A handful of soil is a small and very complex ecosystem which includes soil particles, pores, aggregates, organic matter and a staggering number of microorganisms, all of which interact to keep the soil healthy and productive.

Each soil is different. The primary factor determining the physical properties of a soil is particle size. Sandy soils have a coarse structure, large pores and little ability to hold on to water and nutrients, which makes them prone to leaching.  Clayey soils hold nutrients and water, but because the pores are small they are prone to waterlogging.

The pores between soil particles are important for water flow but also for the movement of gases. Particularly important is the exchange of oxygen with the atmosphere, because plant roots and most soil organisms need oxygen to breathe.  Sand, silt and clay particles are bound together to form aggregates. These aggregates form the skeleton, or matrix, for chemical and biological processes which are critical for soil functions.

Each gram of soil contains a billion bacteria, which is almost as much as the human population of China or India, and about 50 times the number of people in Australia. And this number does not even include soil fungi. All these bacteria and fungi can coexist because they have different needs or don’t interact.
For example, a bacterium on one side of the aggregate is quite isolated from a bacterium on the other side of the same aggregate. So even if these two bacteria have similar needs, they don’t compete.
They may also not compete because they are not active at the same time. In a given soil condition, only a small proportion of the bacterial population is active. The majority are inactive (dormant) and come to life only when conditions are optimal for them.

Another reason for the staggering number of microbes in a gram of soil is the huge diversity. A gram of soil contains around a million different species. Among them are generalists but there are also specialists, such as those capable of fixing nitrogen from the atmosphere or degrading wood. 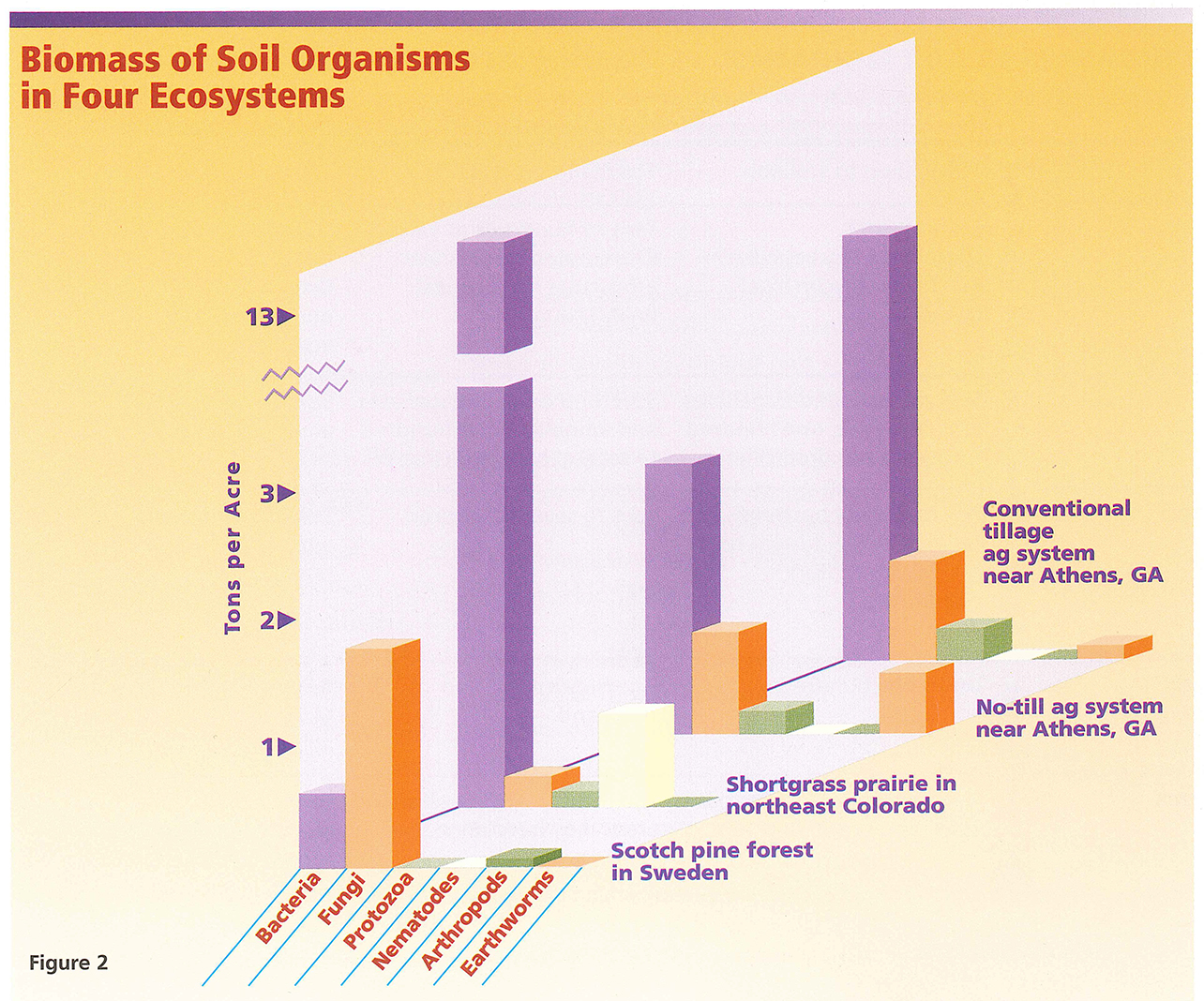 Figure 4: The mass of microorganisms  (tons per acre) varies significantly between different soil types and farming systems.  Irrespective  the species numbers and masses are so large they are difficult to comprehend. Source: Soil Biology Primer, USDA.

The food of the vast majority of soil microbes is organic matter, which is mainly plant matter. When plant matter gets into the soil, it is attacked by soil microbes for energy and nutrients. This attack is aided by soil animals such as earthworms or mites. They mix the plant matter in the soil and its microbes, fragmenting it and thereby improving contact between plant matter and soil organisms.

During decomposition of plant matter, microbes multiply and produce carbon dioxide and nutrients for plant uptake. The dead microbes and the components of the plant matter that are very difficult to decompose help to bind the soil particles together. This binding is also aided by slimes produced by microbes and the long filaments of fungal hyphae. The aggregates formed in this way are stable, which is important for adequate water and air supply for plant roots and soil organisms. If aggregates are not stable, such as in sodic soils, water and air supply are restricted and plants and soil organisms will suffer.

Feeding your soil
Maintaining a certain level of organic matter in soil is critical for sustained soil health and function. Organic matter not only ensures that aggregates are stable, but also acts like a sponge, holding water, which is particularly important in sandy soils.

Another important function of organic matter is supply of nutrients required by plants. As mentioned above, decomposition of plant matter releases nutrients and it also can bind nutrients which can become available later.  But organic matter also decomposes, so needs to be replaced regularly. You can do this by adding plant matter growing in your garden or from outside to the soil, either directly or after composting.

Compost is more stable in soil than litter or straw because it is already decomposed during the composting process. It is a good glue for soil particles and binds nutrients, but it will not supply much nutrients for plants.

Fresh young plant matter is a good source of nutrients, but also decomposes very quickly and may initially release more nutrients than the plants can take up.  Mature cereal straw is nutrient-poor and decomposes slowly. So for good nutrient supply and long-term soil productivity, you may have to supply a mix of different types of organic amendments.