The post-fire police road blocks to prevent residents, supporting volunteers and service providers entering so-called danger areas in the Monegeeta/Bolinda/Darraweit Guim area is an example of bureaucracy going mad under the pretext of community safety. They demonstrated how there is a major information gap between incident controllers making decisions in an office and the reality in the district.

The most serious concerns I encountered after the 9 February 2013 fires was the inability of residents to gain access to their properties or return to their homes and farms behind a road block if they needed to pass beyond it for supplies or appointments once the immediate fire danger had subsided.  I saw some residents after being told they would not be allowed back simply turn around and go back to their properties – how did this help the incident controller’s so called personal safety agenda?  Secondly, experienced volunteers from nearby areas unaffected by fire were prevented from entering to provide assistance with livestock, supplies or infrastructure. Thirdly, road blocks were encouraging many drivers to utilise minor roads and even dangerous single lane tracks as alternative routes to reach their destinations.

I don’t blame the police on road blocks carrying out their orders for this situation, but blame a hierarchy of bureaucracy led by a distant incident controller and a Fire Services Commissioner who can seriously impact individuals’ lives, businesses and animal welfare by making a decision based on inaccurate knowledge about local safety risks. One of the clearest examples was the impact on many landholders who lived behind road blocks on properties many of which were unaffected by fire (in fact it was up to 8km further east of Romsey), being told they could not access their properties, or could not return to them. This went on for two days after the fire threat had shifted from their properties.

There are a number of issues that need to be addressed with an incident controller making decisions that are enforced by police at road blocks. Firstly, police need to be given discretion based on local knowledge and the current situation. For instance, if a property is beyond a road block but is not affected by fire then access by owners and their approved visitors should not be impeded. Where a property is affected by fire the owner’s local knowledge and experience needs to be accepted as relevant and a risk assessment made with the officer at the road block about returning to the property and about allowing access to support volunteers.

Secondly, personal risk is subjective and variable, so enforcing regulations to prevent risk to private citizens will in some cases have the unintended consequence of creating greater danger to individuals. I refer here to landholders not being prepared to evacuate prior to a future fire threat because of past experience with the uncertainty surrounding not being able to return.

These fire road blocks have strengthened my resolve to stay on the farm in the face of a fire threat (with a significant battery of fire fighting and personal protection equipment) because the post fire regulations are most likely to be unacceptable to the way I expect livestock to be looked after. I refer particularly to taking immediate action inspecting and if required undertaking humane destruction of livestock burnt in a fire, as well as providing feed and water for animals.

In this regard I note the comment made on the ABC radio on two days after this fire by a Department of Environment and Primary Industries (DEPI) spokesperson responsible for animal welfare about when government personal could enter an area affected by fire. He said it was after the incident area was declared safe enough to enter by the incident controller. In any fire incident some sections affected will be safer to operate in than others and so action can begin earlier when individuals are allowed to make decisions based on local knowledge.  In this fire the Darraweit Guim area was sufficiently safe to work in to alleviate animal suffering on the Monday morning (14 hours post fire), as the fire front had passed well to the north.

Urgent post-fire situations require on the ground risk assessment which competent affected landholders and unaffected supporting neighbours prepared to help, should be able to make for themselves considering the circumstances in front of them. The risk assessment should not be made for these people via the road block police based on the decision of a distant incident controller who has no knowledge of the local circumstances and need for urgency to act. 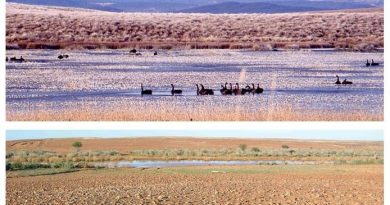 Environmental baselines and the myth of lost Eden