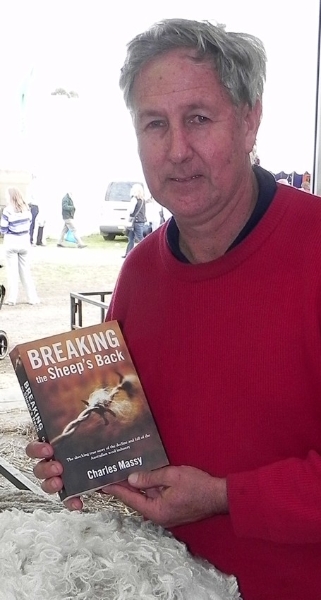 Charles Massy’s “Breaking the Sheep’s Back” must be among Australia’s best non-fiction business greed novels. The author’s ability to capture the mood of events leading up to the Merino wool industry’s Armageddon in February 1991 makes riveting reading.

“Breaking the Sheep’s Back” emerges the reader in an area of Merino industry agri-politics, federal politics, textile manufacture and sheep farming that is characterized by all the worst features of human nature. It’s about power, money, greed, chauvinism, elitism, bullying, arrogance and complete disregard and even contempt for knowledge and education. What’s worse is the contempt it demonstrates for fellow human beings, in this case fellow wool growers, business people and consumers.

And what is hardest to understand is how the 30 or so key decision takers in the Merino wool sector’s catastrophe walked away from the mess without any repercussions and leaving behind monetary losses estimated as high as $9 billion associated with the failed scheme and business losses and social upheaval particularly amongst wool growers and wool processors. As Massy points out at least the individuals responsible for massive business over indulgences and frauds associated with the late 1980’s and early 90’s (eg Bond and Skase amongst others), were eventually held to account, this didn’t happen to any involved in the Merino wool catastrophe. What’s more he said some appeared to be rewarded and feted after the events: “Vines headed up a wool enquiry; David Asimus was praised as the ‘Don Bradman’ of the industry” and appointed to a number of company boards”.

Massy also highlights an amazing characteristic of many Australian farmers to simply accept bad decisions made by representative organisations using their levies.

While the unabated arrogance of the key decision makers in the Australian Wool Corporation, Sheep Council and International Wool Secretariat dominates the story, Massy incorporates two positives into the saga. Those are the views of the vocal minority of Merino wool farmers prepared to stand up against the Merino establishment’s decisions and make their voices heard. Key amongst these were Lynne Johnstone, WA, and Phillip Davis, Victoria. Secondly, the dogged persistence of some wool industry and ABARE economists who throughout the period continued to present marketing facts  to their employers in spite of the advice being constantly ignored if it in any way questioned the legitimacy of the reserve price scheme. As Massy said many economists were treated with disdain “ …indeed anyone without soil on their hands…” was.

What strikes me about the whole saga was the unquestioning allegiance of virtually all farmers’ agri-political organisations to the reserve price scheme even when it was billions in debt and farmers were committed to a 25% wool tax and a sheep slaughter scheme to reduce production.

Such “towing the line” attitude amongst farmer agri-political organisations still exists for many big issues, for instance in support of genetically modified organism (GM) grain varieties and for the continuation of live sheep exports. It maybe coincidence that all the state farmers’ organisations are of the same mind in favour of these initiatives but there does seem to be some similarities in thought processes associated with them and support for the reserve price scheme through to its demise in 1991. Both are associated with producing and marketing base level commodities which offer little opportunity for product differentiation and value adding by farmers and any farmer with an opposing view about them is branded as being part of some sort of anti-farming fringe group. As Massy often noted, the three tiers of the reserve price scheme “…was the emulation of an ideal man-made fibre company, but it ended up constituting the dumbing down of an exquisite, multi-variant, natural fibre to a mediocre commodity.”

This book is far more than a history lesson it makes engrossing reading and could one day make a great movie drama. It is highly recommended to anyone involved in farming, economics, marketing and agri-politics.

“Breaking the sheep’s back” is widely available across book stores.