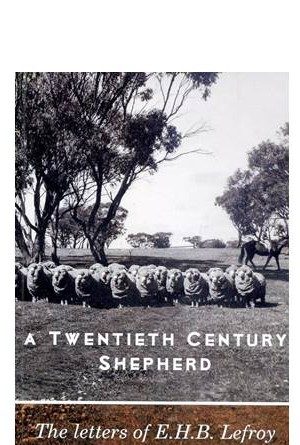 An extraordinary insight into Western Australia’s Merino breeding and pastoral history has been published by the Lefroy family so that future generations are better informed of the challenges farmers and graziers faced during the first 50 years of the twentieth century.

“A Twentieth Century Shepherd – The letters of E.H.B. Lefroy” is a family farming history like no other I have read. That’s because E.H.B. Lefroy (Ted) made carbon copies of thousands of typed letters he wrote throughout his working life. It’s as if a journalist, recorded over approximately 40 years, every conversation Ted had with hundreds of people – his family, his farming and scientist colleagues, as well as people involved in causes that interested him.

The letters demonstrate the activities and passion of a remarkable Australian who from a privileged position within a highly successful WA pioneering pastoral family  devoted his life to helping others in a science based quest for a more productive and profitable pastoral Merino wool industry.

His letters counter one of the myths and current day criticisms surrounding our pastoral pioneers that because of their connection to Great Britain (and Ted was closely connected) the farming methods employed during the 19 and 20th centuries were based on experience from the “mother country”. Ted’s letters demonstrate this was not the case with his Merino breeding, pastoralism and farming as they were developed to meet the challenges of the climate, soil types, water availability, pests and existing vegetation. An enormous amount of scientific research went into finding solutions for the challenges presented.

In 1949 Ted reflected on 40 years developing Cranmore Park after he moved there to manage the newly acquired native vegetation block in 1909: “It seemed pretty hopeless. We had to think again and go on thinking and experimenting for many years. It was all new to us. There were many headaches and disappointments but, in time, things unfolded,”

While I did not know Ted Lefroy I was privileged as a journalist and editor of FARM magazine and Australian Farm Journal for 32 years, to interview and become friends with his son Peter Lefroy who took over the management of Ted’s Boolardy Pastoral Company and Cranmore Park Merinos. After reading this book I now partially understand where Peter’s passion for Merino sheep breeding and improving the productivity and profitability of pastoralism comes from.  He was constantly embracing and evaluating science based ideas and endeavouring to pass them onto the industry at his own expense. While we were separated by distance Peter and I corresponded regularly by letter covering issues raised in magazine articles about Merino breeding and pastoralism in general. His feedback was invaluable for targeting articles on developments that were happening across the country such as sire reference schemes, artificial breeding, and soft rolling skin science.

What struck me most about this book is how raw the issues were for pastoralists during the early 20th century. With the hindsight of enormous agricultural and veterinary science knowledge it is difficult to appreciate the challenges back then. Ted Lefroy recognised challenges and became part of their solution through his engagement with and contributions to CSIR (now CSIRO), the University of WA, and the WA Department of Agriculture.

A classic example is Ted’s support for a new technique being promoted in the 1920’s by South Australian Merino breeder J.W.H. Mules which is now known as mulesing and tail stripping.  Mulesing became a routine surgical procedure in Australia to prevent breech flystrike in Merinos and is still practiced by around 85% of breeders despite opposition from animal welfare organisations, some Merino breeders, an increasing percentage of wool garment manufacturers and their customers and myself. But at the time when Mules introduced this surgical procedure which until the last 10 years has not been accompanied by any anaesthetic, fly strike was a mammoth problem responsible for killing tens of thousands of Merinos. That’s because there were no chemicals to prevent flystrike or a full understanding of Merino skin biology and its impact on flystrike.

While Ted saw mulesing, tail stripping and the “four inch tail” as a game changer for Merino flocks it is interesting that he also made an observation in 1931 about the genetic selection potential for eliminating most flystrike, a solution which became topical in the 1990’s when former CSIRO Merino sheep skin biologist Dr Jim Watts introduced the Soft Rolling Skin selection method in clients flocks.

“… (mulesing) adoption may be favoured by those who would hesitate to alter their breeding methods in order to eliminate wrinkles and folds from the breech”.

Ted considered some breech wrinkle as being a natural feature of sheep just like their tails but still reflected on what could be: “Some day the perfect sheep may evolve, and the perfect sheep will not need his tail removed nor will he need the mules operation. But that day is a long way off.”

Flystrike was such a problem before mulesing was introduced that Ted considered it threatened the continuation of his involvement in stud Merino breeding. Under such circumstances the debate was about the survival of pastoral sheep businesses. Ted’s approach to the problem was scientific and holistic (taking account of multiple factors involved) even back then:

“Five years ago, however, we commenced the mules operation and now, supplemented by two crutchings a year and occasionally some jetting in the spring, together with the help of BTB dressing and the four inch tail, the blowfly problem is well in hand and causes little concern. From our own experience with blowfly methods, the findings and recommendations of the Joint Blowfly Committee (of the CSIR) are completely confirmed, for this and other mercies rendered by research we are deeply grateful.”

Another classic example of how Ted assisted development of critically important animal husbandry and farming was his involvement with the introduction of sub clover. This legume pasture plant is synonymous with soil health, perennial pasture grasses and crop productivity and livestock nutrition, but it was unknown in the Moora district where Ted was running his Cranmore Merino stud and had started a cereal cropping program.

“I had always lived with the hope that there would be some wonder plant that would improve our pastures, and in 1911 I read of subterranean clover. So I sent to South Australia for five pounds of seed. This did not spread…the next move was to find the variety most suited to our land. I had been told by the Department of Agriculture that it would not grow in our district that had such a low rainfall. However, I was determined to prove this for myself.  In 1937 …the CSIR sent an officer to Cranmore to see if there was any truth in the fact that we were growing subterranean clover where they considered we could not, and he was simply amazed.”

In 1951 Ted gave a broadcast talk about farming over the years at Cranmore. He remarked “the land had a carrying capacity of one sheep to the acre (2.4 sheep per hectare) in the summer. This compared with the original capacity of about one sheep to 10 acres.”

Ted success with sub clover and dealing with oestrogenic clover impacts on sheep became well known and he received many letter asking for advice. “They were answered in much detail”. He also hosted groups of farmers to Cranmore to inspect sub clover pastures and learn about varieties and how the seed was sown in the cropping rotation.  One of these group visits in 1939 became the catalyst for the formation of the Miling Pasture Improvement Group – the first of close to 100 such groups in WA.

The Miling group co-ordinator Gerry Throssell was the local Department of Agriculture extension officer.  Ted attributes the success of the group to Throssell who recognised the value of “…community effort backed up by self-help and scientific guidance.” Today this approach is referred to as landcare.

It is hard for farmers today to imagine how many practical issues had to be overcome in farming districts throughout Australia during the first 50 years of the twentieth century. In 1961 Ted wrote:

“I think we can say that our enlightenment was first awakened by the Extension Services of the Department of Agriculture. Those of you who came along after the cult of agricultural science came to us can hardly imagine the ignorance that prevailed in the earlier days.”

The book covers Ted involvement with many of the practical farming issues that needed to be sorted including rabbits, sheep diseases and Merino sheep genetics. His involvement with pioneering geneticists A.L. Hagedoorn, Merino sheep skin biologist Harold Carter, CSIR, and the University of WA makes fascinating reading.

Dr A.L. Hagedoorn a world leading livestock geneticist was encouraged to visit Australia by Ted Lefroy. Here they meet at Perth airport in 1949. Ted referred to Hagedoorn’s book ‘Animal Breeding’ as “…the best there is as a guide for practical breeders.” Photo: WA Newspapers.

While this book has a strong focus on Merino sheep breeding it should have wide appeal to any Australian who wishes to gain a greater understanding of our pastoral history and the challenges the early pastoralists faced. The way this is achieved through Ted Lefroy’s hundreds of letters is the extraordinary feature of the book. In my view it is a must read book.

“A Twentieth Century Shepherd – The letters of E.H.B. Lefroy” selected by Richard Lefroy was published by Hesperian Press Western Australia in 2012.

At the age of 18 Ted went as a jackeroo and later overseer to Boolardy station. In 1909, aged 21 he moved to Wittenoom’s newly acquired Cranmore Park property near Moora “where he pitched his tent”. He spent the rest of his working life at this property (but with responsibility for other farms and stations).

In 1917 the Merino stud was translocated from Boolardy station to Cranmore as it was far better suited to breeding stud sheep being in the agricultural region. Ted eventually took over managing Boolardy Pastoral Company from his uncle who died in 1939.

Frank Wittenoom wrote his memoirs which provide a fascinating insight into exploration of Western Australia’s pastoral regions. The memoirs were published in 2003 by Hesperian Press.  “A Varied and Versatile Life” by F. Wittenoom edited by R.L. Lefroy ISBN 0 85905 317 2, provides readers with an even earlier insight to issues faced by WA’s pastoral pioneers.  This book is still available from Hesperian Press.

“A Twentieth Century Shepherd” contains letters written to and from Ted’s uncle F.F.B. Wittenoom, so the reader has a great opportunity to link the two men by reading both books. 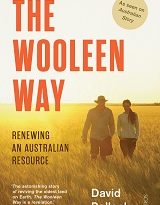