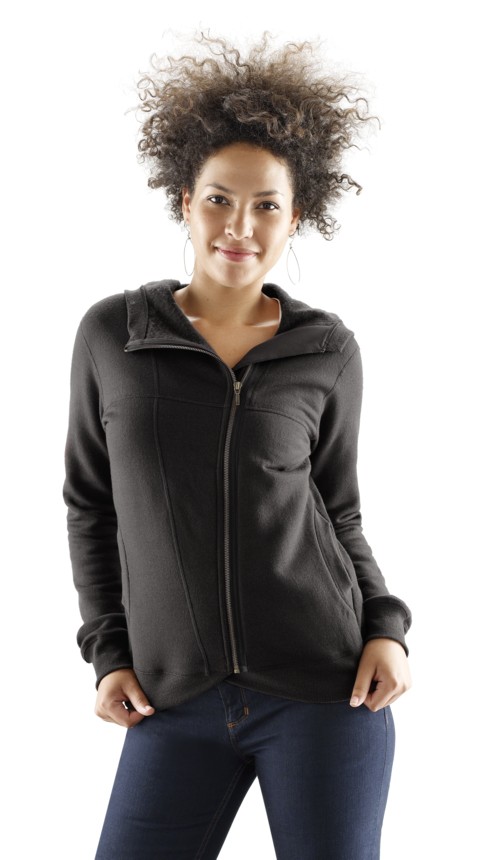 Nau (pronounced “now”) is a clothing company based inPortland, Oregon USA that prides itself on making sustainable urban and outdoor apparel in ‘integrated designs for the modern mobile life.’ Merino wool is used in around 20% of its clothing range, but none is sourced from Australia. It all comes from New Zealand farms with Zque certification for traceability and environmental and animal welfare management.

All aspects of Nau, from the products to the business model, are an extension of the employees’ collective identity, says Nau Director of Fabric and Product Development Jamie Bainbridge. “We design for ourselves first, and the same goes for business,” she says. “If we can’t stand behind the decisions we make, why should our customers?” Nau sells clothing in the US,Europe and Japan to younger well-to-do consumers “who tend to be conscious about products they buy,” Bainbridge says.

Nau opened in 2007, and used wool from the start. “We strive to have sustainability and traceability in all our materials,” explains Bainbridge. “However, because it involves animals, wool is the single most complex fabric I deal with by far. The challenges lie in the fact that we are not wool farmers nor do we purport to know what’s best for sheep, but we as a company want to do best by the land, and the animal and the environment in terms of processing.” This means attempting to address everything from traceability, biodiversity, veterinary and end-of-life practices to quality of life (including mulesling) and use of pesticides, as well as how wool is knit, weaved and dyed.

‘Zque’ third-party-certified Merino wool from New Zealand, which Nau uses for all of its knits, satisfies all those factors. Zque is also used for baselayer and insulation products. Bainbridge says Nau has gravitated to Zque because it sidesteps the mulesling issue; blow-flies aren’t much of a problem inNew Zealand. “It’s also because Zque was well-established and we can get a commitment to the same price for several years,” Bainbridge says. “That’s a huge advantage as a buyer.” At the same time, Bainbridge is aware of the Australian third party certification and traceability scheme NewMerino (but not aware of  The Merino Company’s ‘Sheep 2 Shelf’), and says there is definitely the potential for sourcing certified wool from Australian Merino sheep farmers involved in such programs.

Because Nau only uses small volumes of other wools however, the company is not able to access sustainably farmed and traceable wool for other products, such as sweaters. Nau’s sweaters are currently made from high-quality recycled Italian wool. “We plan to offer sweaters made of traceable wool in 2012,” adds Bainbridge. “Traceability and sustainability for all our raw materials is something we’re constantly working to improve so that we can offer more transparency to the consumer.”

Nau also sells clothing made from bottom-weight woven gabardines, containing spandex and wool from Italy and Turkey, but again, the company does not use enough volume to ensure traceability. “We also use some coat weights,” says Bainbridge. In total, Nau sells between 5000 and 10 000 wool garments a year, which accounts for about 20 per cent of total sales.

Partly because of Nau’s hard work (and the work of others in the supply chain) to market and educate consumers about wool, the company’s sales of knits have grown every year. “For the American market, that’s saying something,” says Bainbridge proudly. “We’ve done a lot to promote wool as comfortable next to your skin, as washable.” Nau has always used a 140-180 gram knit at 18.9 microns because, notes Bainbridge, “that’s where we need to stay to have next-to-skin comfort.” She believes it takes everyone along the supply chain to do marketing: “Our knitter helps with promotion, and we get visited by Australian Wool Innovation with new ideas that inspire us and really get us excited about wool.”

The other element of their highly successful knit sales is the strong focus on added value and fashion Nau gives to all their products, with lots of design elements that make them stand apart. “We need to have the design and fashion so we can charge a price that allows us to keep going,” says Bainbridge. “We couldn’t stay open selling base products.” Their pant weights don’t sell as well as the knits, mainly because “It’s hard for young people who buy designer clothing to see themselves wearing something in shorts that their fathers wore in pants,” Bainbridge observes.

The Woolmark logo isn’t something she sees as holding any value or influence amongst consumers these days, mostly because its use has declined so much. “We don’t use it,” she notes. “We only have a tiny hangtag with a UP Ccode on our products, but we provide a great deal of information about wool on the website.” The website also provides Nau its best forum for sales – a way to both ship directly to customers and sell wholesale to retailers.

But retail stores, where consumers get to see the styles, functionality and quality of Nau clothing in person, are also critical. “All you have to do is get them to try it on,” says Bainbridge. “It’s also word-of-mouth that’s slowly changing consumer mentality that wool is washable and you can put in dryer, that it’s got great attributes as a fabric, and wears a really long time.” Bainbrige considers the possibilities for using wool in Nau clothing to be “endless” and believes “consumers are willing to pay the price.” Nau is looking into combining with Merino with other natural fibres such as alpaca, and using Merino cashmere in sweaters.

Marketing and designing with wool

From Nau’s perspective, interest in and demand for natural and animal welfare-friendly textiles of all kinds (for example, wool from non-mulesed sheep, low flock densities), are very strong among consumers. “All of the outdoor clothing businesses have been attacked by PETA and we get these questions constantly from PETA and from customers,” Bainbridge says. “Our consumers understand the word mulesling, but don’t know the complexity around it. Of course all the Zque wool is from un-mulsed sheep, but the recycled, we don’t know. We are upfront with customers about that and let them make the choice.”

While she thinks environmentally-friendly aspects of textiles (such as organic and the use of heavy metals in dyeing), are important to consumers, Bainbridge believes people generally have many misconceptions about synthetic dyes. “Natural dyes can be very bad, much worse than synthetics and that’s counterintuitive,” she says. “Consumers don’t know that with a lot of synthetics, all the chemistry is used and the effluent is very clean, but with natural dyes there is no guarantee of that. It can have salts, mordents and heavy metals. We continue to educate.”

Some consumers are surprised, for example, that a conscious company like Nau processes all their cut-and-sew (non-sweater) wool using an anti-shrink chlorine process to de-scale the fibers. “We decided to use this process because doing so results in a more durable, softer product,” says Bainbridge, “but it’s a closed-loop process that ensures the chemicals are reused. We’re always evaluating other options, but we haven’t found any other that provides an end product free from serious shrinkage and pilling.”

Education of the consumer about wool farming works best, says Bainbridge, when Nau can give the product a personality and connect them with the wool grower. “An Australian Merino grower came to our trade show and his hands were like nothing like you’ve ever felt, very rough and callused,” she notes. “He was the real deal – and a big hit.”

Although one might think that Nau’s clothing designers have to make hard choices between wool, natural fibres such as cotton, cashmere and synthetics, that’s not at all the case.  “Nothing else impacts on wool,” Bainbridge says. “We build products from the fabric out, with functionality in mind first, so it’s not a matter of the fabrics being pitted against each other. We focus on the beauty of what each fabric can do. One will not fill another’s position.”

Because Zque buys contracts from growers with locked-in prices, Nau’s Zque wool prices have stayed fairly steady. However, as with everything else, Bainbridge expects prices of all textiles to go up. “Here at the top of the supply chain, we get third hand information about what has impacted pricing of wool,” she says. “We understand things like when a drought has shrunk the flocks, the price goes up, but we’d love to understand more.”

Of all the things the Australian wool industry could do to ensure a strong future, Bainbridge thinks the most important one is to make it easy for companies to buy the wool they need to create products consumers want. “You have to understand the supply chain you are feeding in order to serve it better,” she says. “In this case, the supply timeline coming out of the Australia and New Zealand for wool fabric with stripes, which sells better than solid wool, is unacceptable. It’s two months because Australia has no top-making and yarn spinning. It’s completed in Asia so the wool travels overseas and back again. It’s just too long.” Bainbridge understands that the Australian wool industry has given away this part of the process to keep costs down, but it’s created another huge problem – a time lag that is unworkable. “You are not saving anything in the end,” she says.

Bainbridge isn’t sure what the best solution is – whether it’s best to spin wool and make the fabric in Australia or do both in Asia – but she does know one or the other needs to occur, and soon. “My company has been committed to working with these unacceptable timelines, but most aren’t,” she notes. “And actually, I recently found a fabric vendor who can cut out the two months and I jumped at the chance to work with him. He knits in Thailand and we produce garments in Thailand, which cuts transportation to China out of the process.”

Styles using wool that is not traced (merino/angora blended yarns) 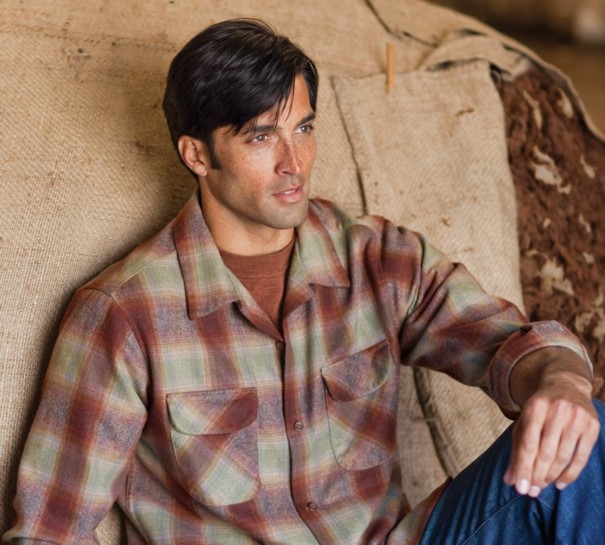 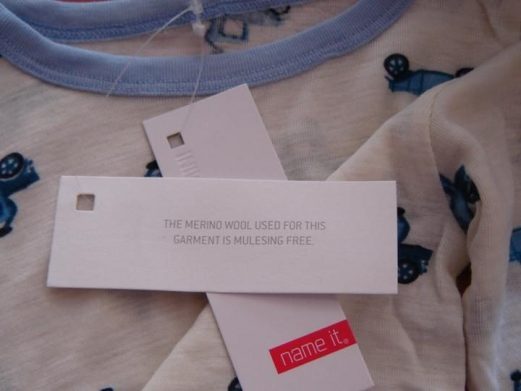