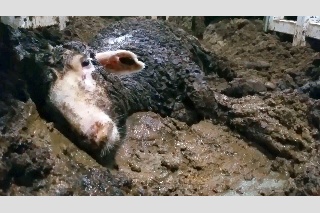 By Patrick Francis
In a Sheep Central article on 9 May 2018, WA farmer and live sheep exports advocate Steve McGuire assumes that the people opposed to the live sheep trades are animal rights activists, the RSPCA, and some politicians looking to score favour of electors. He fails to mention that there are many sheep farmers who would like to see the trade phased out as it has failed on welfare grounds and is an affront to their efforts to present credible sheep welfare management to the general public.

McGuire and other farmers who argue for the trade to continue should lobby their state farmer organisations to run a referendum on the question of support for the trade amongst sheep farmers. The organisations should also survey WA’s abattoirs to find out if they have the capacity to process more lambs and sheep that would otherwise been exported alive. And at the same time ask the abattoirs how many more people would be employed and the extra value returned in value-added sheep meat.

In 2014 the CIE’s report “Contribution of live exports to the Australian Wool Industry” stated “…Kingwell et al (2011) made an assessment that there was sufficient capacity in the WA processing sector to process sheep diverted from exports due to throughput levels lower than full capacity and the scope for expansion through the addition of shifts. The excess capacity was estimated to be between 1.7 and 1.8 million head per year. ..Sapere (2103) conservatively used a total (WA) capacity estimate of 5.9million (sheep).”

WA Dept of Ag and Food 2017 sheep statistics shows domestic slaughter at 4.1 million head and live exports at 1.6 million head. From this data and previous estimates of WA processing capacity, the state’s abattoirs could easily process the sheep currently being exported live. In doing so the value of the extra processed sheep as value-added cuts would put more money in the state’s sheep farmers pockets, and increase employment in regional centers where the abattoirs are situated. 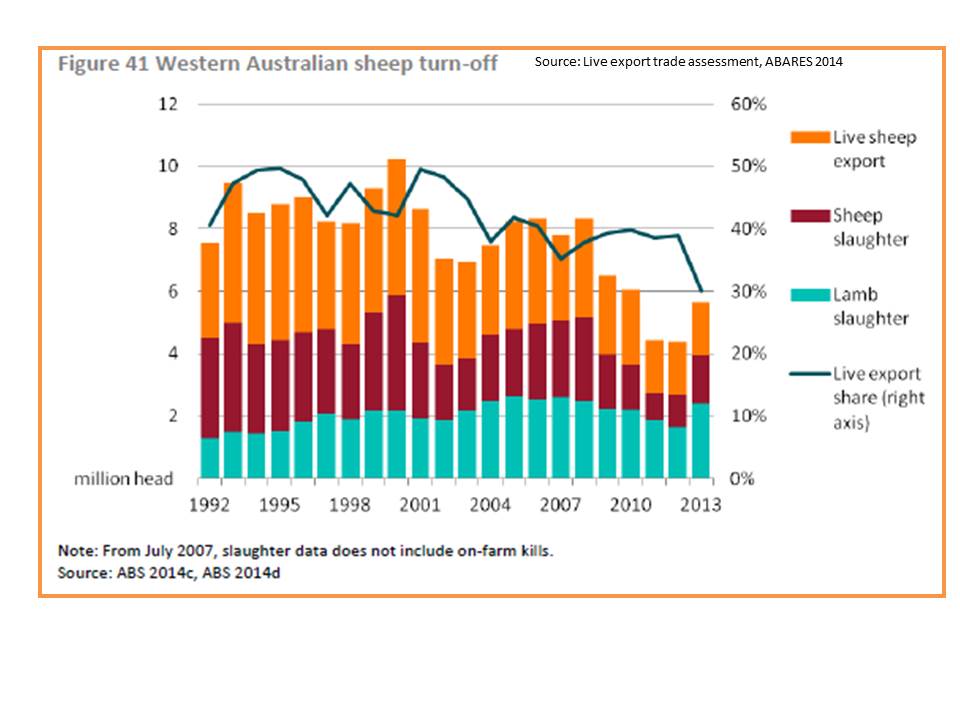 Currently livestock abattoir owners are not saying how they see the impact of a live sheep export ban. While their representative organisation the Australian Meat Industry Council (AMIC) does not support a ban on live exports, its chairman Lachie Hart told ABC Rural on Sunday 8 May, that with immediate investment in the workforce and facilities, Australia’s meatworks and abattoirs could meet an increase in demand if live sheep exports were phased out.

“It has to be a coordinated approach, having a knee-jerk reaction to just completely ban that particular trade isn’t going to help anyone, it’s certainly not going to help processors in the short term. If the Government is prepared to support the manufacturing industry in Australia, support us in training our labour, to get labour into our plants, we certainly have the capacity and the ability to handle the live (sheep) export trade volumes,” Hart said.

As for farmers relying on the live sheep exports for business survival, WA state farmer organisations should release data on how many farmers exclusively supply that outlet, and what is the enterprise breakdown of WA sheep farming businesses. This would give substance to claims by these organisations that farmers businesses would suffer from an end to the live sheep export trade. 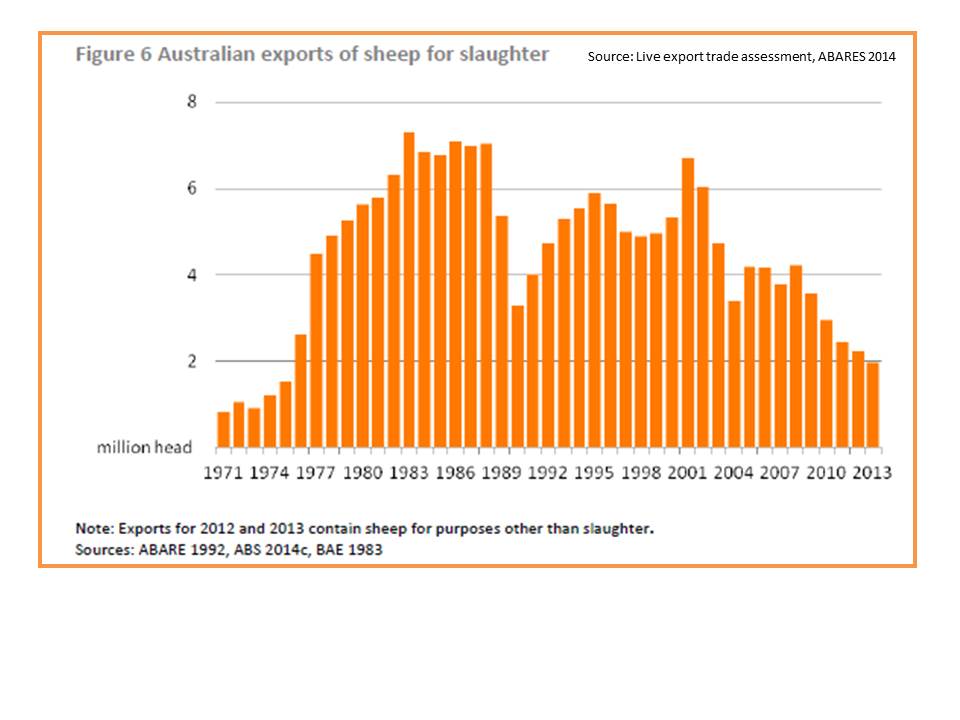 On this issue the ABARES 2014 analysis “ Live export trade assessment” states: “In WA …production of shipping wethers, rather than prime lambs, is suited to crop-dominant farmers who prefer a sheep enterprise that requires less time and management (Kingwell 2011). Wethers have a longer selling window than prime lambs and, on average, have lower finishing costs, particularly in the face of varying seasonal conditions. …For specialist lamb producers (in WA) … live exports provide an outlet for lambs that could not be brought up to slaughter in their short selling window (Kingwell et al 2011).”

Another relevant point made in this report which flys in the face of claims that many WA farmers will suffer if live sheep exports are phased out, is the lack of any reference to “specialist” sheep farmers supplying the trade. In contrast, the report identifies, 180 “…beef cattle specialists in the northern live cattle export region” who “…derived more than half their (annual) receipts from live exports”.

Even the Minister for Agriculture and Water Resources, David Littleproud, is content to ignore his own departments findings on the low importance of live export sheep sales to farmers incomes. In his media release announcing the findings of the McCarthy review on 17 May 2018, he says:
“The livelihoods of farmers across WA and parts of SA, New South Wales and Victoria as well as 1800 jobs, depend on the live sheep trade and we need to give certainty to these people.”

His statement is completely at odds with the ABARES 2014 report on the importance of live sheep exports to individual businesses viability.

The ABARES report suggests that most live export sheep are the lower value left over wethers after crop farmers use them for stubble and weed control or from lamb farmers who don’t have the management to finish animals for processing before pasture quality declines in spring. The report is far from an endorsement of the argument that some WA farmers rely on live exports to ensure their business survival.

The history of sheep farming in WA since 1990 demonstrates farmers have the capacity to find alternative enterprises to live sheep trading. At the time of the collapse of the wool reserve price scheme in 1990, there were over 34 million sheep in WA. By 2012 the number had reduced to 15 million. What happened to WA farmers during this radical sheep flock decline?

The live sheep trade can only be described as a sunset industry, it has declined from around 6 million sheep exported in 2001 and 2002 to less than 2 million in 2017, around 80% of which are sourced in WA. Over these years most farmers involved changed their business enterprise mix and or management to suit the trades demise. They will do so again when live sheep exports are phased out.

The McCarthy review does little to ensure welfare of sheep on live export ships and in third country destinations will be improved. The key reason why is that logistics of sheep transport for two to three week voyages is fraught with unforeseeable events which have the potential for animal suffering. A live export ship may start the voyage with required ventilation, but when it breaks down mid voyage there is no escape for the sheep. As for increased fines being introduced – they are virtually irrelevant if ventilation breaks down, the heat will continue as will ammonia and methane toxic gas production from the decomposing floor litter (see introduction image), so the sheep still suffer and many die. As well, there is doubt about Australian authorities ability to prosecute off-shore owners of sheep on the high seas.

Introduction photo sourced from Animals Australia. The photo highlights a point not yet made by all the “experts” supporting live sheep exports, which is that  during the voyage litter on pen floors generates increasing concentrations of toxic gases including ammonia, methane and carbon dioxide. When ventilation is inadequate or fails during the trip, these gases become another source of sheep suffering on top of heat stress.  The McCarthy review does not mention toxic gases generated by decomposing litter laced with manure and urine. Nor does it address the issue of “shy” feeders, the 5 to 10% of sheep which refuse to eat pellets and gradually starve to death during the voyage.

Figure 2: Many of live export lambs are animals which do not make weight and fat specifications for domestic processing before the WA pasture growing seasons ends in mid spring. Photo: Patrick Francis. 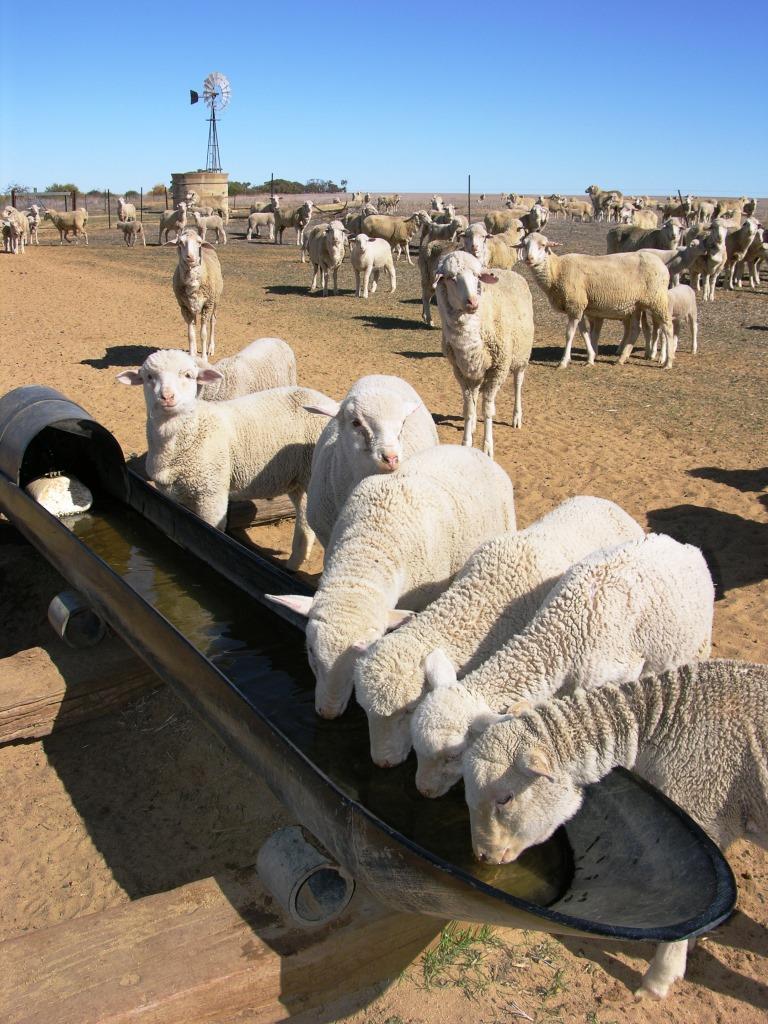 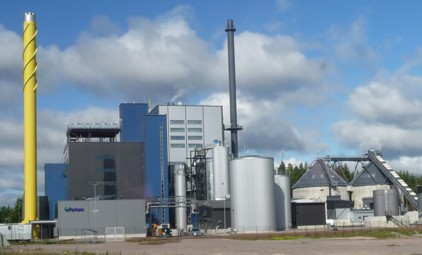 Letter from Finland where biomass is leading energy source